Working with the Stars Kenny Rogers was one of my music idols years before I worked on his marketing. Ya gotta love Mr. Hollywood… me with the glasses. 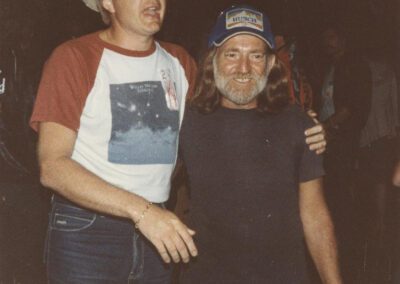 Willie, what an incredible set of shows every time he bussed his way through one of the 5 states I managed for CBS. Just don’t share his tequila and his golf game in the same day! 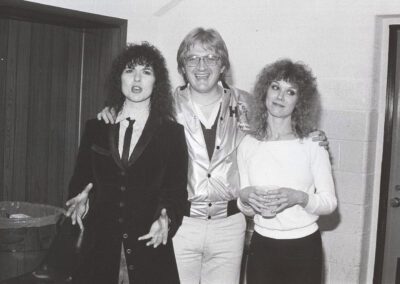 Ah… what a serene pic of Ann and Nancy Wilson of “Heart.” Serene because only moments later Ann’s birthday cake became the center of our food fight. What rockers Ann and Nancy were! I should never be in my car when “Barracuda” is playing on the radio! Zero to 80 in two guitar riffs! 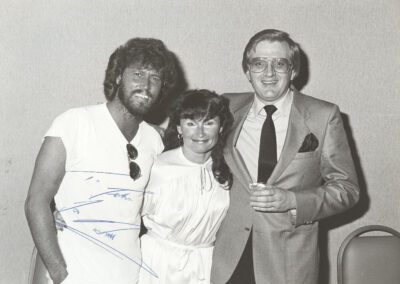 You can hardly talk about the disco days without recognizing the Bee Gees were at the cornerstone of that short but exciting phenomena. “Saturday Night Fever” sold more than 30 million copies and we could just not keep up with the orders. Of the Gibb brothers, Barry seen here and his youngest brother, Andy were the biggest heart throbs of that generation. Andy died too early and Barry is the only Gibb still alive. 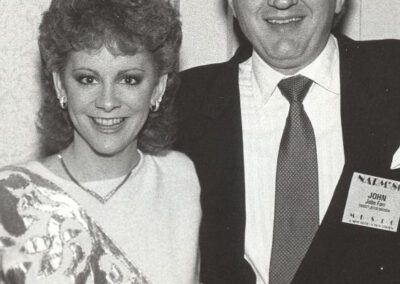 Ah the energetic redhead! Reba was as nice as you would think she would be. Her persona from her TV and concert appearances ring true for her face to face interactions. When this pic was taken she had just completed co-starring in the SyFi movie “Tremors” with Kevin Bacon. 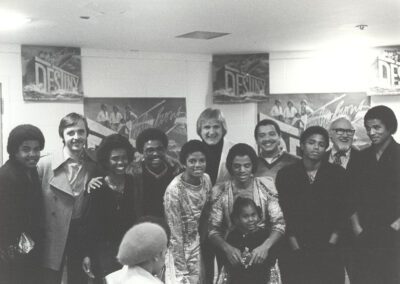 Michael Jackson and his talented brothers. Michael was on Epic Records, a division of CBS Records. I ran the CBS office in Detroit, MI and had the occasion to work with the Jackson family for the new releases. The most memorable was the summer of 1982 when we first heard the promo cuts of “Thriller”… we knew music history was about to be launched. A world talent and a terrible tragedy to lose. 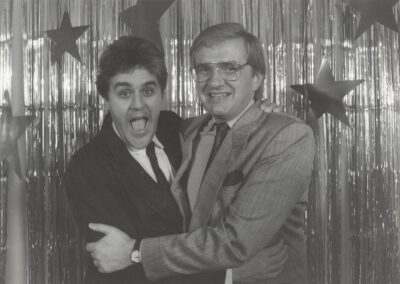 Jay Leno got $25,000 from us to perform at our company sales meet in 1987. Ten years later his fees for the Ford convention was a million bucks for 3 nights. How do you suppose he bought all of those classic cars? 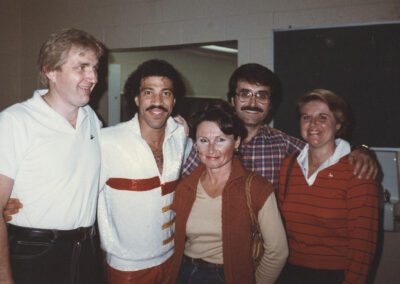 In the spring of 1981 we went on a bus tour of Detroit to retailers and radio stations alike for the “All Night Long” tour (a key piece of lyrics from Lionel Richie’s newest album at the time). This pic was backstage that night with Lionel, who couldn’t be more hospitable and approachable. I first met Lionel in 1978 in Atlanta, Georgia when “The Three Times A Lady” was a smash by the group he was with at the time, The Commodores. 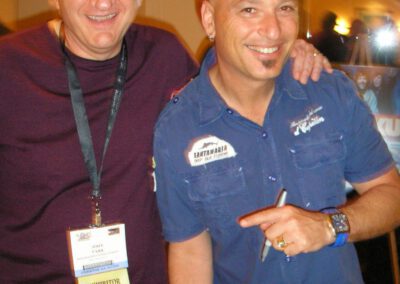 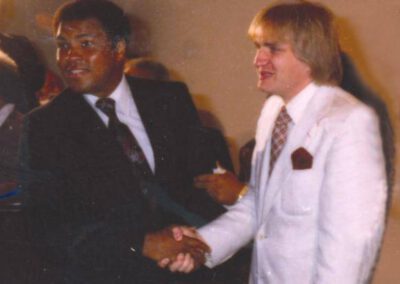 The champ… one of my most exciting moments to spend with a celebrity. This was at the Rosa Parks foundation meeting in Detroit and the champ could not have been more impressive than he was that day. He boxed with me (just playing of course – thank God). Ali was still the champ of the world then in 1981 and is truly the greatest in his sport or any of life’s endeavours. A great man, a great inspiration for me. 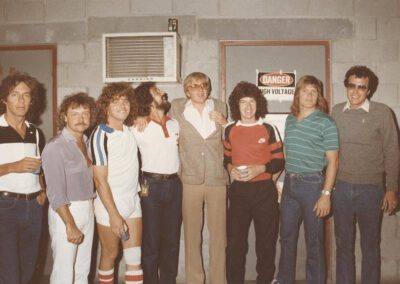 Backstage with REO (lead singer Kevin Cronin is next to me in the middle of the picture). I was a little out of it that night as the group presented a gold LP plaque to me for our work on their album “Hi Infidelity.” 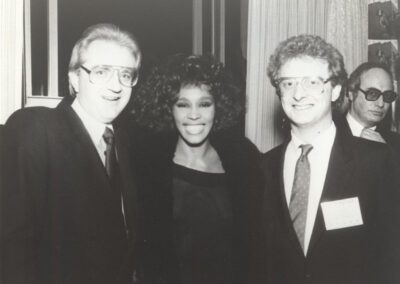 Whitney walked out on stage in front of the record industry for the first time in Miami to a cynical “we’ve heard it all before” veteran music crowd in 1984. Thirty seconds into her first song the room fell silent in shock. We knew this young pretty lady would be a queen of pop music. It was only a matter of time and that didn’t take long. Her loss to her family and the industry was huge. I think that she, Celine Dion and Barbara Streisand had the greatest female voices of all time. 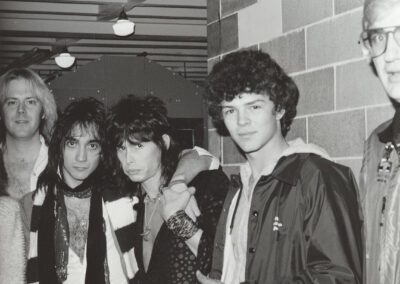 Aerosmith – Steve Tyler is third from the right. I was lucky to get in the picture because the boys were rather boisterous that night. Hard to believe that Stevie could be boisterous right? 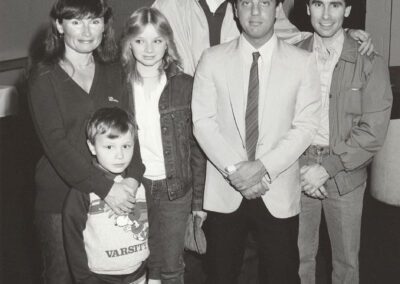 Billy Joel, the “Piano Man,” with me and family… I’m the tall one! This was Billy before his first divorce and before he met Christie Brinkley. He must have needed a step ladder to speak with her. 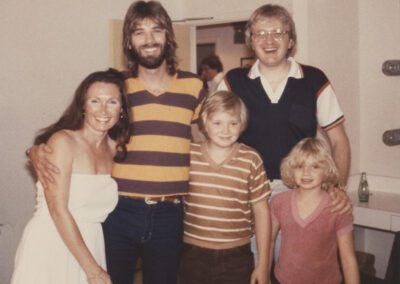 Ever see “Caddy Shack?” Kenny Loggins did the title theme of “I’m Alright” while being danced to by a gopher. The movie cast was one of the best ensembles of comedic talent ever assembled with Rodney (no respect) Dangerfield, Bill Murray and Chevy Chase. Loggins had many hits for one of my record labels, Columbia, and was another one of those great guys backstage… Tall dude! 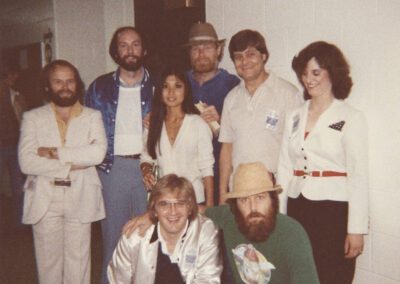 The Beach Boys were one of my first set of heroes when I was a teenager (ok, that’s a lot of years ago!) and that’s Brian Wilson down near the floor with me and Mike Love in the center back row and Al Jardine all the way to the left. Brian was a little quirky at times but his psychologist said: “Brian, if you decide you don’t want to play a song anymore regardless of the crowd opinion… you don’t have to play.” Brain would get up in the middle of a set and just casually walk off with the rest of the boys simply doing the “Brian Shift” to cover keyboards. Quirky but oh what a writer. “Pet Sounds” came out in the middle of the British invasion and swept to the tops of the music charts. 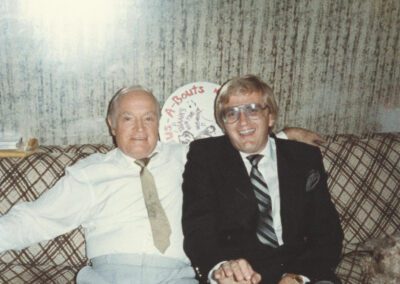 One of the great entertainment icons of all times… Bob Hope. He was 82 years old when this backstage pic was taken and he was one of the richest persons in the entertainment business then (before the big days of Oprah and Spielberg). I asked why he still entertained at that “mature” age and his wife Dolores started clapping her hands to give an answer – even someone as world famous as Bob Hope needed applause… so do you, me and our employees. Johnny Mathis, one of the great crooners of all times. I met Johnny for the first time in 1978 and we became fast friends. His golfing skills are only matched by his graciousness to me and everyone I brought backstage over the last 30+ years. 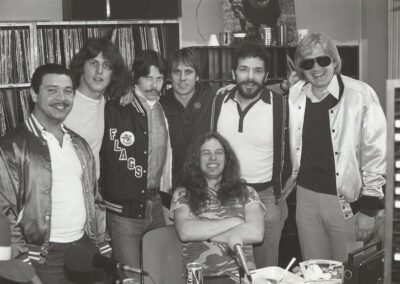 The Motor City Madman – I became a fan of Ted Nugent’s music in 1968 when he recorded with the Amboy Dukes. Many hits came after that, like “Wango Tango” in the 1980s . You never knew what Ted would say during radio conferences such as WMMS in Cleveland, the famous AOL rocker. 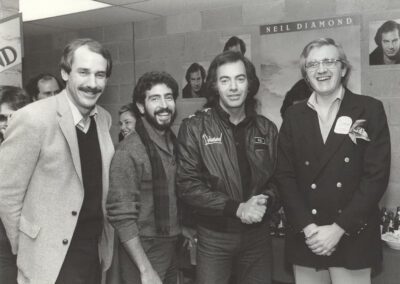 “The Solitary Man” …Neil Diamond with mega platinum albums from the 60s and 70s. “Solitary Man” was his first huge hit in the summer of 1970. For all of you AARP folks you know he had dozens of chart toppers… remember “Forever in Blue Jeans?” 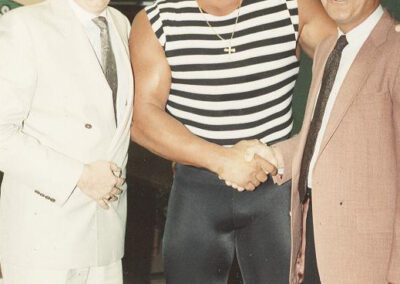 The “Hulkster.” Thunder lips “in the flesh baby.” 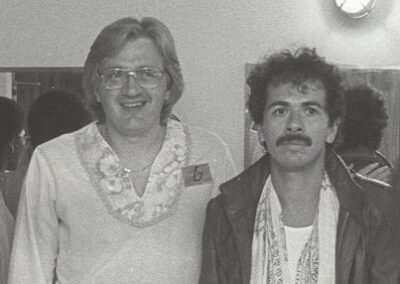 Carlos, voted as one of the 100 greatest guitar players of all time. I met him the first time on the summer of 1970 when he released “Abraxas” featuring “Black Magic woman” and “Oye Como Va”. This pic was taken with Mr. Santana backstage in 1981. 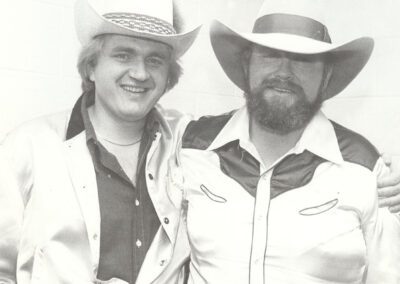 Charlie (“The Devil Went Down to Georgia”) Daniels. A truly class act on and off stage. You couldn’t meet a nicer personality in or out of the country music biz. And oh how that man can saw on that fiddle. It’s especially impressive to have him do it backstage only two feet from you… you’re waiting for his bow to catch on fire! 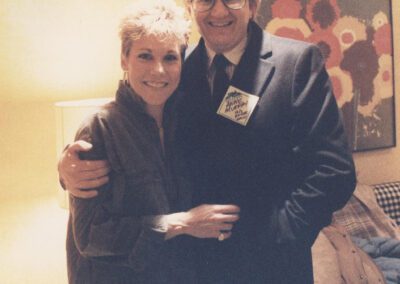 Annie Murray was the first artist I did marketing work for in the summer of 1970 and her “Snowbird” 45 topped the charts as number one for many weeks. She was one of the best to work with – funny, talented, and approachable to all my backstage guests. 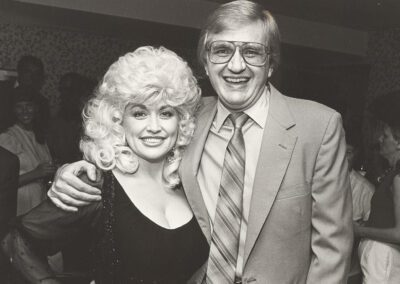 What can I say about spending time with Dolly talking about her career? She was always a lady and, in addition to being a great singer/entertainer, wrote some songs that are classics such as one of Whitney Houston’s biggest hits “I Will Always Love You” (for the movie The Body Guard with Kevin Costner). 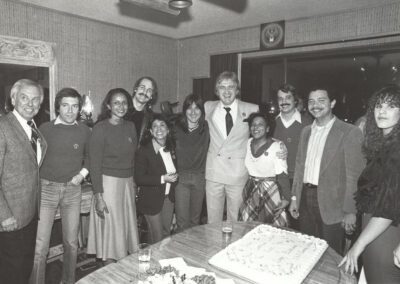 Steve Perry of Journey has to be one of the most recognizable classic rock voices of all times. There have been many attempted substitutes for him in the group and they’re not bad… but they’re not Steve. No one ever will be. I especially remember working the “Escape” album. What an instant monster! 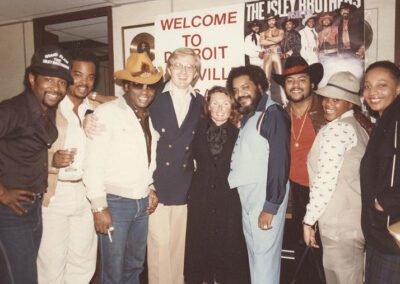 The Isley Brothers – you wouldn’t meet nicer gentleman. These guys were pros and especially stand outs from some of the celebrity conduct today. 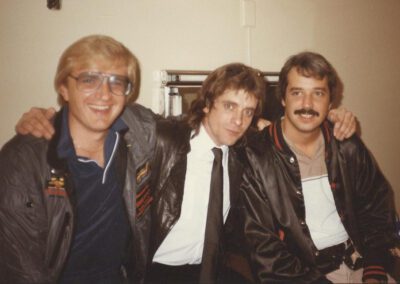 Eddie Money looks a little weird here because he might have been “under the influence” after this particular concert. We had lots of hits with Eddie including “Two Tickets to Paradise” and “Shakin.” 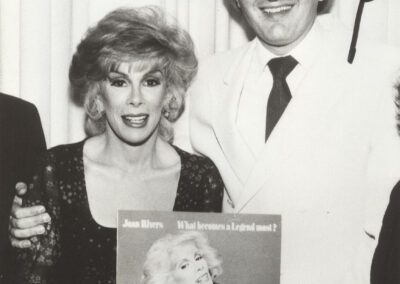 I’ve worked with many comedians over the years such as Dangerfield, Leno, Richard Lewis, Seinfeld, Tim Conway (Carol Burnett show), Howie Mandel, Bob Hope, Phylis Diller, etc., but no one had any faster retorts and comedic reactions then Joan Rivers. She was just as funny in person as she was on the tube. I was quite taken by her interest in how we would market and sell her comedy album… she was a good business person in addition to being a great comic!